Apart from his achieving distinction awards for Jazz & Hip Hop from Australian Teachers of Dancing (ATOD), he was the first in Asian to obtain a Honours with Distinction for Contemporary Dance level 5 in 2014. In the aspect of Martial Arts, Master Derek is also an official Judge and Coach from Singapore Wushu Federation. Which gave him another skill to infuse martial arts elements to some of his art work.

He started Dancescape (Singapore), a non-profit dance troupe, to provide a platform and opportunity for passionate youths to develop a foundation in dance and for them to train on their ability to perform and showcase their dance talent professionally. He strongly believes that dance is only complete with a good learning attitude, apart from good dance technique and a strong foundation. With this belief, he places great emphasis on responsibility, discipline, respect and integrity among his students and during dance training. He pushes his dancers beyond boundaries not only in terms of dancing but as a person with good characteristics.

"First comes a PERSON, then a DANCER" - Master Derek Seong

This year, Dancescape (Singapore) is proud to present iCANcer-Vive Too, a dance production filled with questions, uncertainty, exploration and emotions. Master Derek lost his mum, Mdm Helen Thng to cancer in 2016 which dealt a huge blow to him and his family members. Till now, this hard fact of their mum's departure is still unbearable. Going through all odds, Master Derek hopes to pay a tribute to his mum using what he is best at, that is dance. His mum had always been very proud and supportive of his dance endeavours and never missing a single performance and show that he danced, directed and choreographed. This dance production is the first and the last time Master Derek will be sharing the stage with his beloved mum.

Locally, his works have involved the Ministry of Education, Singapore Art Museum, Maya Dance Theatre, Singapore Chinese Dance Theatre, Dance Horizon Troupe (Singapore), Dancescape Singapore, NUS Dance Synergy, Waseda Shibuya Senior High School, LASALLE College of the Arts and the Philharmonic Youth Winds. Recently, he conceptualised, directed and choreographed for Intensi-5, An Evening of Contemporary Dance at the University Cultural Centre Theatre in 2016, as well as Intensi-5: Dancer at the Intersections(2017) and Intensi-5: Dancing Left of Centre (2018) at the Esplanade Library. He also contributed a dance work at the 5th Asia Arts Festival 2017 held at the Yong Siew Toh Conservatory of Music. Peter has conducted seminars and workshops for the Esplanade, LASALLE College of the Arts, Nanyang Academy of Fine Arts, NUS Dance Synergy, O School, Dance Ensemble Singapore, M1 CONTACT Contemporary Dance Festival and the 6th Singapore International Dance Festival 2015. He recently staged works and presented at London’s Trinity Laban Conservatoire of Music and Dance, Hong Kong Academy of Performing Arts, the New Zealand School of Dance and the 2017 World Dance Alliance Global Dance Summit in Canada. A graduate in Dance and Choreography from London’s Trinity Laban Conservatoire of Music and Dance and the University of Roehampton, Peter received the Trinity Laban Award and Vice Chancellor’s International Scholarship respectively. He is currently a PhD candidate at the Victorian College of the Arts (University of Melbourne), with Choreography as research focus.

As a performer, Shahrin commands the stage with his presence and is known for his intriguing choreographies. He employs his Asian dance and contemporary training into his body of work. His works usually creates awareness of social issues, or to share a story to inspire and to push boundaries to further discover new dimensions for contemporary dance with Asian Identity.
Shahrin’s artistic works includes Sweet Lips (2012), (in)elegance (2012), Small Steps (2013), Sense Senseless Gap (2013), Unspeakable (2014), Embrace (2014), Path (2012 – 2015 ), The Conference (2015 – 2016), KA (2016), Empty Space (2016) . In 2017, he created a new work, Re:Path for Release 6.0 by MDT, inspired from his previous work, PATH. As an assistant choreographer of MDT, Shahrin has worked on Gra-vi-tate, Anwesha-The Quest, Legend, The Journey Begins and GREY.
Starting as a volunteer and now the dance program leader, with mentorship from Kavitha Krishnan, Shahrin works with Down Syndrome Association since 2005. He has been pivotal in providing them an avenue for inclusive arts practice. In 2015, Canberra Dance Theatre, Australia and choreographer Liz Lea invited Shahrin to work with special needs youth from their programme; he choreographed a piece that was performed in ‘Australia’s International Disability Day’. This year, his previous work Small Steps will be featured in the upcoming Bold Festival in Canberra, Australia. As part of MDT’s outreach programmes, Shahrin works with ‘Youth at Risk’ from 10sq and local schools through arts education programmes. With Kavitha, he also engages in bringing dance/movement to elderly in aged and nursing homes. As an independent choreographer, Shahrin conducts dance/choreographic workshops both locally and internationally. 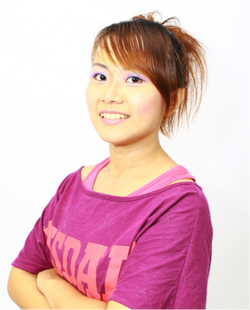 Yuki Lim
Yuki 34, starts dancing at the age of thirteen under her mentor, Mdm Yam Boon Fong where she develops her passion in Chinese dance. After which she continues her training under Mdm Ding Hong and Mr Zhou Lei in NUS Chinese Dance, Singapore Foochow Association and Theatrearts Troupe.  Constantly training in Chinese dance, she is actively involved in annual performances.

As an active member of NUSCD, she was involved in choreography, stage managing, organizing and running events. She was nominated and awarded Alumni of the Year under Tan Ean Kiam Arts Award 2010, presented by NUS Centre for the Arts. She also attended several overseas performance and cultural exchanges during her years in schools such as overseas training at Beijing Dance Academy Mauritius‘s 60th Anniversary of Republic of China under NUS Chinese Dance, Korea Gyeongju World Performing Arts Festival 2007 and Eidgenossische Technische Hochschule Zurich's 150th Anniversary Celebrations.

In 2010, she completed the Beijing Dance Academy Chinese Dance Graded Examinations (Syllabus Grade 4 and 5). Apart from Chinese dance, she exposes herself to other dance styles and is certified as Jazz and Hop Hip trainer under Australian Teachers of Dancing (ATOD). Currently, she continues her training in modern dance under Rhythm ‘N’ Moves Studio.

With the motivation and desire to groom talents in dance, she starts her career as a trainer under Rhythm ‘N’ Moves Studio to teach in schools’ dance enrichment programmes and co-curriculum activities. She choreographed dances for many schools’ grand events.
With the interest in developing dance programmes to introduce dance to the mass and also to instill fun in learning dance suitable for different age groups, she specializes herself in designing and managing dance programmes for schools. Currently, she is one of the pioneers in teaching and designing MOE’s initiative, Programme for Active Learning. Not only that, she also teaches students in special schools with the belief that dance is for everyone and anyone. Recently, she designs programme to encourage parents to participate with these students in dance. This not fosters the family bonding but also open up the minds of parents to spend and enjoy more time with their kids.